KELOWNA, BRITISH COLUMBIA – February 22, 2016: The Okanagan Wine Festivals Society is delighted to announce the 22nd Best of Varietal Wine Awards. The contest is held in conjunction with the annual Spring Okanagan “Bud Break” Wine Festival, the official celebratory welcome of spring in the Valley. The 10-day tasting revelry features over 80 culinary and wine events, with 119 member wineries participating in this year’s festival on April 29-May 8, 2016.  The competition marks the start of the festival and recognizes the top British Columbia varietal wines across 26 different categories. The final awards entry deadline for wineries to participate is March 22, 2016.

Similar to the British Columbia wine industry, the competition has expanded significantly since its founding in 1994 as the “Winemaker’s Awards,” with last year’s contest seeing a record 479 entries.  This year’s contest will have 15 judges select the best wine in each varietal category and award gold and silver medals to the other winners.  The contest is open to all British Columbia wineries that use 100% fruit grown in the province.  An exceptional aspect of the judging is that it is conducted primarily by sommeliers, restaurateurs and select media from across western Canada and features a unique judging process that allows each panel of judges to evaluate all of the wines in any given category allowing a direct comparison for selecting the best wines.  The Best of Varietal Wine Awards is managed under the professional eye of Marjorie King who has over two decades of wine competition experience with the Okanagan Wine Festivals Society.

"Can we surpass 500 entries in 2016? We have revised the judging format to provide a little more value to the top wines in each category by awarding not only "Best of" awards but Gold and Silver medals as well,” said Julian Scholefield, Operations Manager, Okanagan Crush Pad Winery and Judging Chair Okanagan Wine Festivals Society.  “In addition to that we have reached a little further afield to bring on some exceptional judging talent to the valley to join our esteemed local palates for this competition. We are also hoping to continue with the momentum of previous years. So back to my question... 'Can we surpass 500 entries in 2016?' YOU BET!"

“In BC each year the 'wine season' really begins with the OWFS 'Best of Varietal' competition. These awards give savvy wine consumers the year's first opportunity to discover which local wines are really standing out from the pack,” said Troy Townsin, Best of Varietal Judge and CBC radio wine columnist.  “By utilising judges who have a background rooted in hospitality - we always seem to end up with a selection of 'winning wines' that appeal to everyday consumers and to connoisseurs alike.”

This year’s judging is on April 7, at the Penticton Trade and Convention Center and to date features the following acclaimed wine professionals:

The honours will be handed out at the Best of Varietal Awards Reception and Tasting on April 28, 2016, from 7-9:30 pm at the Penticton Lakeside Resort. Celebrate BC’s best and mix and mingle with local vintners, where guests will be the first consumers to taste the award winning wines. Tickets are $50 and are available at www.thewinefestivals.com or by calling 250-717-5304.  The British Columbia Wine Awards are generously sponsored by Farm Credit Canada, ContainerWorld, Grant Thornton and TricorBraun Winepak.

BC’s Largest and Most Prestigious Wine Competition Coming to Kelowna

MEDIA RELEASE Get your tickets for the fourth annual Chef Meets BC Grape Okanagan June 27 Suggested... 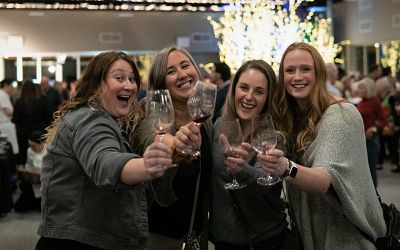